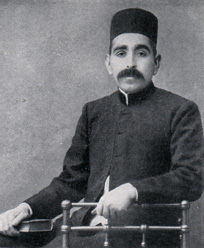 Prince Soleyman Mirza Eskandari, son of Prince Mohsen Mirza Eskandari, Kafil-ed-Dowleh. Brother of Yahya Mirza Eskandari, uncle of Iradj Mirza Eskandari. Ardent constitutionalist; member of the first through fifth Madjles; member of the Social Democratic party of Persia; founder of the Socialist Party of Persia; founding member of the Tudeh Party of Iran. Soleyman Mirza was also one of the founders of the Constitutional movement and the resistance against Mohammad Ali Shah, his own cousin. Later, Soleyman Mirza's acquiescence to the rise of Reza Khan, gave Reza Khan the necessary backing he needed among the progressives in the legislature to lay the plans for the overthrow of the Qajars (Kadjars), albeit ostensibly for the establishment of a republic, which Soleyman Mirza favored and was the motive behind his support of Reza Khan's plans. Of Reza Khan's primary Iranian supporters, he was the only one to escape the executioner, but only because he agreed to a life of internal exile and house arrest until the removal of Reza Shah by the very powers who had put him there in the first place, the British.

Here is what his nephew, Prince Iradj Mirza Eskandari recalls of those fateful days, in his Political Memoirs. Elmi Publishers, Tehran, 1989, pp. 17 ff. (To be completed)

For a complete page on the Eskandari family, click here.