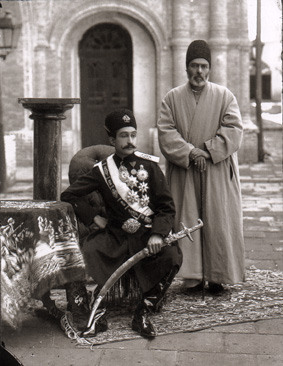 Abulfath' Mirza is shown here at his home, posing for posterity as a powerful Qajar (Kadjar) prince. He was the third son of Mozaffar-ed-Din Shah, and brother to Abolfazl Mirza Azod-ol Soltan, Mohammad Ali Shah and Malek Mansour Mirza Sho'a' al-Saltaneh .

"In 1906, the prince's father Muzaffar al-din Shah (reigned 1896-1907) signed the first constitution in Iranian history to limit the powers of the absolute monarch. The following year the prince's brother Muhammad Ali Mirza became king, mounted an offensive against the constitutionalists, and bombarded the young parliament. The twenty-seven-year-old Salar al-dawla joined the coup on his own terms, putting forward his claim to the throne. The brothers were defeated and sent into exile. In 1911, Salar al-dawla tried to gain control of the monarchy in Kurdistan, but failed, as did his attempt in Khuzistan. Each time he escaped to Europe. He died in Alexandria at the age of eighty." From Sevruguin and the Persian Image: Photographs of Iran, 1870-1930, p. 68.