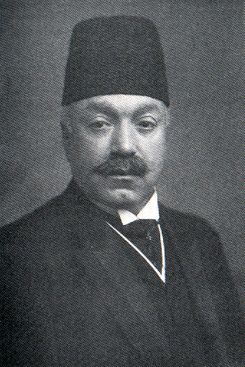 Abol-Ghasem Khan Gharagozlou, Nasser-ol-Molk, was on the opposite side of Atabak-e Azam, Amin-e Soltan, in the struggle during the fateful years of the Constitutional Revolution. He was educated in Britain, studying at Oxford at the same time Lord Curzon was there. His classmate at Oxford was Edward Grey (later Sir Edward Grey), one of Great Britain's important foreign secretaries.

Nasser-ol-Molk was president of the pro-constitutionalist cabinet in 1907, and resigned, together with his entire cabinet, the night before Mohammad Ali Shah's move against the constitutionalists. Captured, put in chains and thrown in jail by Mohammad Ali Shah, to be executed, he was saved from certain death by the intervention of the British legation on his behalf. During the Regency Period of Soltan Ahmad Shah's reign, he became the second Regent, after the death in office of the first regent, the elder Azod-ol-Molk, Ali Reza Khan Qajar (Kadjar) (Amir Soleymani), head of the Qajar (Kadjar) tribe. Nasser-ol-Molk was regent from 1910 to 1913, until Soltan Ahmad Shah reached majority.