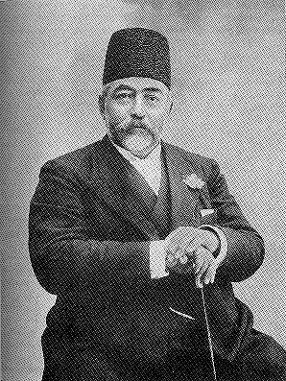 Mirza Ali Asghar Khan, Amin-e Soltan, Atabak-e Azam, Mohammad Ali Shah's Prime Minister. One of the most seasoned politicians of his period, he was an ally of the Russians in their struggle to dominate Persian politics. He was recalled from exile by Mohammad Ali Shah and asked to be his prime minister. Previous to this post he held the post of prime-minister under Nasser-ed-Din Shah and Mozaffar-ed-Din Shah, Mohammad Ali Shah's father and grand-father. A staunch monarchist, opposed to certain factions of the constitutionalists, and especially opposed to British influence in Persia, he was assassinated on August 31, 1907, by a man by the name of Abbas Aqa of Tabriz, a "fidai" or religious warrior from Tabriz. The assassination of Amin-e Soltan was probably instigated by the British in their attempt to regain control of political affairs in Persia. His assassination triggered Mohammad Ali Shah's disbanding of the constitutional assembly (Madjles) and the subsequent shelling of its building in 1908. These events also hastened Mohammad Ali Shah's downfall in 1909, to the delight of the British who now would deal with his young son, Soltan Ahmad Mirza (later Soltan Ahmad Shah) and a retinue of princes, courtiers and politicians favorable to them. The Amin-e Soltan's total devotion to the Qajar (Kadjar) kings he served is witnessed by the title Nasser-ed-Din Shah bestowed on him, "Trusted of the Soltan."