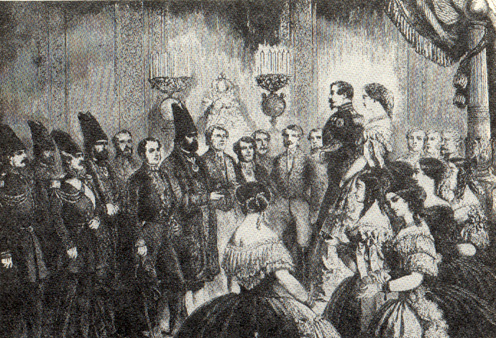 This is a painting of Farrokh Khan, Amin-ed Dowleh II, on a state visit to France, in the presence of Emperor Napoleon III. Amin-e Dowleh was Nasser-ed-Din Shah's "Sadr-e Azam" or prime minister, and was one of the most important personalities in the court at the time. (Source of lithograph Tarikh-e Iran dar Dowreh-ye Qajar, by Iradj Afshar)

Nasser-ed-Din Shah calls the third and eldest surviving son of Farrokh Khan Amin-ed Dowleh, Mohammad Hossein Khan, "Farrokh Khan" on the tradition that the son of the courtier who is dearest to the shah is named by him after his father's name. This is the Farrokh Khan in the painting above. He also inherits the title Amine Dowleh from his father with royal assent. (Amin-ed Dowleh II).

His modern day descendants are the Ghaffaris, among them prominently Dr. Farrokh Ghaffari, founder of the Iranian Film Museum, author and internationally renowned authority on Persian film and cinema.

For the web site of the Ghaffaris, please click here.