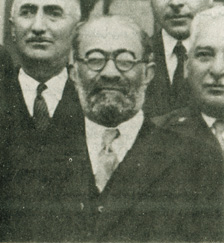 His hatred for the Qajars (Kadjars), and Soltan Ahmad Shah in particular, made him an excellent servant to his next masters, the Pahlavis. Zoka'-ol-Molk was one of the main players in the demise of the Qajars (Kadjars), but even more so was the single most important instrument of British policy for the continuation of the Pahlavis on the throne after Reza Shah's demise in 1941. Having faithfully served Reza Shah until the end, he made one last promise to Reza Shah before the latter went into exile, that his son Mohammad Reza Pahlavi would ascend the throne and that the Qajars (Kadjars) would not return under any circumstances. 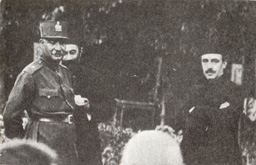 Zoka'-ol-Molk standing behind Reza Shah in the role of the good servant that he was. Opposite both of them with arms crossed across his chest is Teimurtash, Reza Shah's minister of court. (ca 1926-27) 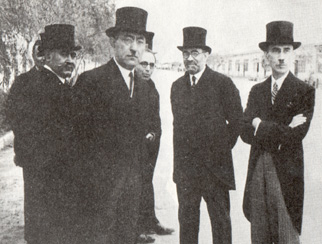 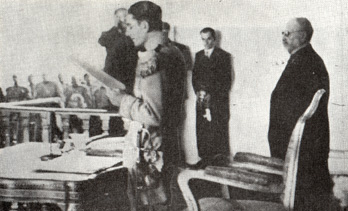 Zoka'-ol-Molk quietly keeping a promise to the late Reza Shah. The scene is that of the installation of Mohammad Reza Shah as shah of Iran.

Zoka'-ol-Molk in his last role as "eminence grise" and prime-minister to Mohammad Reza Shah Pahlavi.

After the coup against the Qajars (Kadjars), in 1925, the new constitutional assembly, having toyed for a short while with the idea of a republic, had decided to bestow the crown on Reza Khan and thus bring about dynastic change. In the haste with which this was achieved, one crucial matter was overlooked, the matter of Soltan Ahmad Shah's resignation. The new government had forgotten to ask Ahmad Shah to sing a formal resignation. He thus was still king and the coup government illegitimate.

Being presented with the offer by his former courtier, Soltan Ahmad Shah replies: "I am not willing to sell [my resignation] for a thousand fold the amount you offer. Tell your master from me that this is wishful thinking on his part. I can hold my head high before future generations of Iran and before my own conscience, that I have even been willing to be deposed rather than to betray, and that I have done nothing but to carry out the duties that had been bestowed upon me, and that history will judge that I have been deposed against the will of the people of Iran. My resignation would be interpreted as an act of assent and an agreement on my part that rulership was not mine by right. For these reasons even if you had offered me the whole world I would not resign." (Makki 245-246)