On the Spelling of the Qajar (Kadjar) Dynastic Name

Qajar, Kadjar, Ghadjar? What is in a name? What, further, is in its spelling? There is more to it than is at first apparent!

As to what is in the name "Qajar," the answer is that this is the central theme of all the pages on this site. It cannot be answered in a brief sentence or two. As to what is in the spelling of the Qajar (Kadjar) dynastic name, well, a lot to say the least. One might say that it does not really matter which spelling one uses, after all the "spelling" is only a transliteration of the Persian "ghaadjaar," but in this case, just as with names and more generally with words, when we say "words have meaning," spelling has meaning too. Of course, meaning is just as much infused into things as it is part of things themselves. We do give more meaning or less meaning to certain things, and when those things are political, well then, more is usually the rule. And so it is with the spelling of "ghaadjaar."

The transliteration for the Farsi "ghaadjaar" adopted by the English speaking world and thus mostly associated with Britain is "Qajar." This is the spelling that is most recognizable to the public at large as having to do with the Persian dynasty in question. To spell it otherwise would not elicit the same association immediately, at least not in the public at large. This is the spelling that has been given currency by scholars like Ms. Lambton, and it has taken root in the American publishing world as well. However, this spelling is not the spelling that the dynasty itself ever adopted, and thus the question is: Why should a different spelling than the one wished for by the dynasty in question become the dominant spelling in the literature?

It is not a secret that the relationship between the Qajar (Kadjar) dynasty and the British government has not always been one of mutual respect and admiration. Occasionally some Qajar (Kadjar) shahs have had better relations with the British and, in turn, the British too, at first, were interested in better relations and were not out to destroy or replace the Qajars (Kadjars) for their own political purposes. Regarding the Qajars (Kadjars), this is true of Fath Ali Shah. It is also true of Nasser-ed-Din Shah. Nasser-ed-Din Shah, in fact benefitted from cordial relations with the British crown (i.e. Queen Victoria) until quite late in his reign. The matter was quite different for his successors, particularly the last two shahs, Mohammad Ali Shah and his son Soltan Ahmad Shah, whom the British positively hated and actively wanted replaced.

England aside, the other country and culture that had an equal if not greater impact on Persia was France. Fath Ali Shah's son, crown prince Abbas Mirza forged a spectacular military alliance with France that brought him at least initially victory in battles against the Russians. French advisors and men of letters travelled to Persia and influenced courtiers who would in turn make the French language the foreign language of choice of the court itself. Thus on his first voyage abroad to Europe, to "Farang," ("Farang," the designation for the European "abroad" really referred to the country of the Franks, i.e. France, pronounced in Persian "Ferang" or "Farang"), in 1873, the shah had taken great trouble to familiarize himself with the French language and had even acquired the capacity to write in the Latin script. It was thus Nasser-ed-Din Shah who first decided how to transcribe the Persian patronymic into the Latin script and his decision was to give it the spelling of "Kadjar" as it would have been spelled in the French language to which he had taken great liking.

To honour the wishes of their predecessor, the subsequent shahs all adopted this spelling as the official spelling when transliterated, as did all the legations on all officials documents emanating from the court or the government of Persia. With the souring of relations with the British, however, the French spelling also took on a political meaning as well. Its meaning was simply this, that it was not British influenced!

In retrospect, this small gesture of independence in the face of the disaster that the dynasty was inflicted upon at the hands of the British seems more of a quixotic beau geste than an act of great import, for after all "what is in a name, however spelled?" And yet, Soltan Ahmad Shah and the remaining members of the Imperial family in exile persisted that this and not the other be the official spelling. And so until otherwise decreed by the same family today, in all official documents that might be issued by the Imperial family in exile, the name "ghaadjaar" is transliterated as "Kadjar" in the Latin script!

To document the usage of the French spelling of "Kadjar" by members of the imperial family and the court, we are pleased to offer the following documents to the interested reader.

The first is a reproduction of a page published in a journal article in Iran, recently, duplicating an entry made by Nasser-ed-Din Shah in Madame Tussaud's Wax Museum in London. The second is an official communique by the government of Persia to the President of the United States. 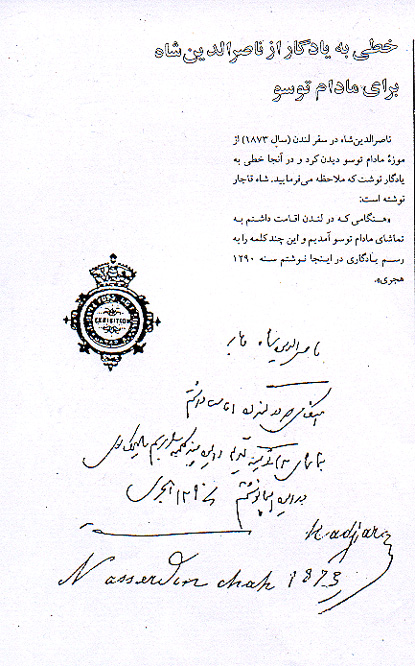 "Signed (in Persian): Nasser-ed-Din Shah Ghaadjaar -- During our stay in London we went to Madame Tussaud's and wrote these few words to commemorate our visit. 1290 A.H. -- Signed (in French): Nasserdin chah Kadjar 1873."

The importance of this document is the manner and spelling in which the Shah signs his dynastic name. The spelling is "Kadjar" not "Qajar" even though the Shah is in England and was quite capable of writing in the English language. This was not an accident or oversight but a deliberate act on the part of the Shah. Not only was he very fond of the French language, he also had decided that the dynastic name be spelled henceforth in the French manner and not in the English manner. This then becomes the official spelling of the dynastic name in the Imperial Family and on all official documents transliterated into or written in the Latin script.

The same is evident in this next document, in and of itself of great importance because of its content (discussed in the Qajar (Kadjar) Succession pages on this site). The letter is by the Regent of Persia, Ali Reza Khan Azod-ol-Molk (Amir Soleymani) Kadjar, informing the President of the United States of America of the arrangements for the succession to the Kadjar throne. In it the spelling "Kadjar" is used twice. Once in reference to Soltan Ahmad Shah Kadjar and once in the signature at the bottom of the document, "Ali Reza Kadjar." The French text being an official translation by the Persian legation in Paris, this underscores the fact that "Kadjar" was the official spelling of the dynastic name. 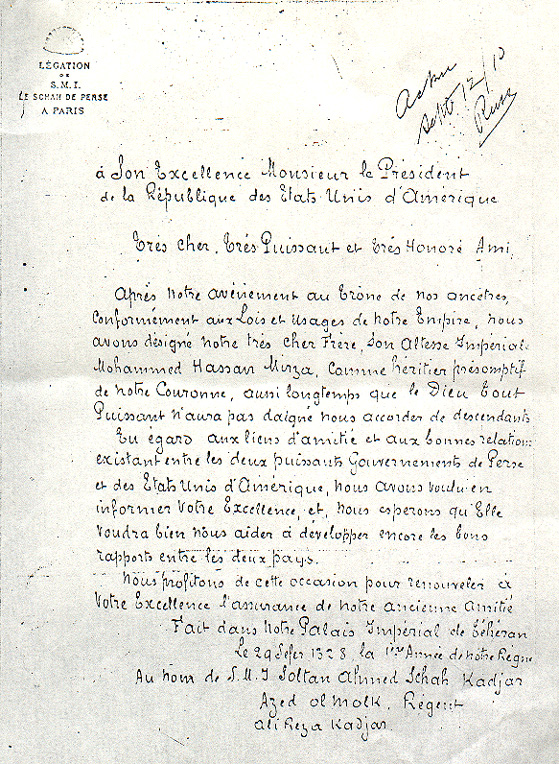 (For the official English translation of the text, please click here.)