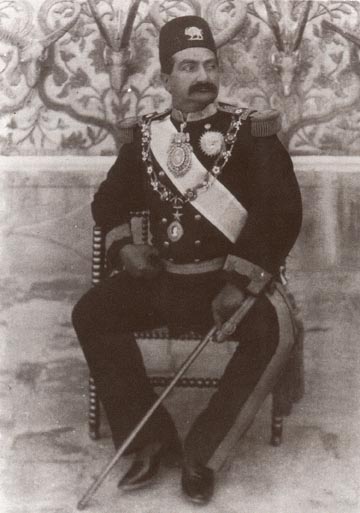 Sons of Mass'oud Mirza in order of seniority:

6. Bahram Mirza Sardar Mass'oud, full brother of Esma'il Mirza. He had no issue.

14. Fereydoun Mirza, who had no issue.

6. Princess Afsar Saltaneh, (full sister of Gholam Hossein Mirza by Kokab Saltaneh) m. Naini. They had one son and one daughter as follows: Dr. Moshir Fatemi and Molouk Sadat.

1) This genealogy of the descendants of Mass'oud Mirza was given to us by our cousin Malek Iradj Badi-Mass'oud who passed away Sunday, March 27th, 2005 in the US. This page is dedicated to his memory and to the memory of the family he loved, the descendants of Mass'oud Mirza. There is a controversy and question regarding a possible additional daughter of Mass'oud Mirza Zell-Soltan, who purportedly was married to Sultan Abdul Hamid II of Turkey. Malek Iradj Badi-Mass'oud added her name as "Zell-e Soltaneh" in his own hand to a hand written list of the children of Mass'oud Mirza in our possession which he sent to us. There is no other corroboration for the existence of such a daughter, either in the Kadjar family archives or in any official document, Persian, British, Russian, or Ottoman. There is also no corroboration whatsoever on the marriage of such a daughter to Sultan Abdul Hamid II, not in Ottoman Court records, not in Ottoman archives, not in British archives, not in Persian archives, that has come to light to date. Therefore no mention of this supposed eleventh daughter is made in any of our genealogies anymore. Should there ever be conclusive evidence to the contrary, proper rectification will be made without delay. We therefore encourage anyone who has documentary evidence of such a possibility to contact us by mail or eletronic mail with the greatest urgency.

3) For the most updated information on the descendants of Mass'oud Mirza Zell-e Soltan, see Genealogy Section of Qajar Studies, Volume V, July 2005, the Journal of the International Qajar Studies Association (IQSA). To order the Journal go to: http://www.qajarstudies.org/IQSAJournal5.html