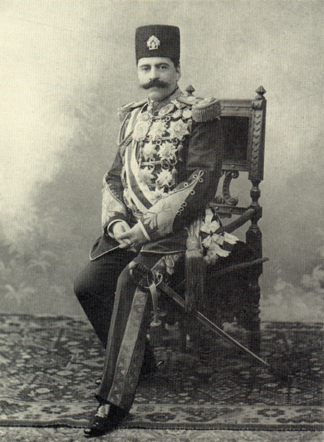 This picture was taken in 1902, when Prince Arfa' ed-Dowleh was Ambassador plenipotentiary of the Qajar (Kadjar) court to Russia. 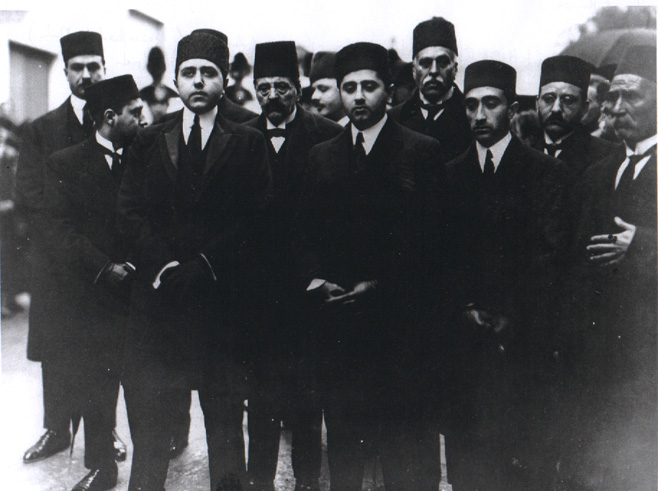 Prince Arfa' ed-Dowleh was a trusted companion of Soltan Ahmad Shah during some of the most crucial times of Soltan Ahmad Shah's exile, including of course the above scene at the funeral of his father. Though Prince Arfa' ed-Dowleh's presence is not mentioned in our comments on the 1925 coup, his presence at those crucial meetings in Switzerland is attested to by Ambassador Anoushirvan Sepahbody in his notes published by his son Ambassador Farhad Sepahbody.(See "Soltan Ahmad Shah and the Coup of 1925-26," in the Table of Contents of the pages. (To go there, click here.)

Prince Arfa' ed-Dowleh's son, General Hassan Arfa', did not have the same connection or loyalty to the Qajars (Kadjars) as his father had. He felt that he owed his education and later career to the Pahlavis, to whom he became and remained a loyal subject. His views on the matter are expressed in his autobiography Under Five Shahs. General Arfa' also published a short biographical note on Reza Shah for the Encyclopedia Britannica which shows the extent of his dedication to Reza Shah particularly. To see this article, click here.