Seventh and Last Shah of the Qajar Dynasty 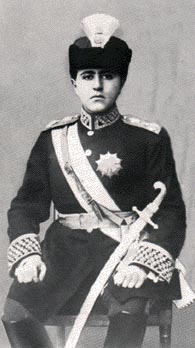 The last shah of the Qajar dynasty, and perhaps the most maligned of all of the dynasty's shahs by its enemies and detractors, Soltan Ahmad Shah came to power at the age of eleven, when his father, Mohammad Ali Shah was forced into exile after his defeat against the revolutinary forces in 1909. Soltan Ahmad Shah was a kind and learned man, who tried scrupulously to rule as a constitutional monarch over an Iran that had entered during his reign into waters, few if any could rescue her from. The British foreign policy establishment was obsessed with removing him from power. In their attempt to find a more maleable and compliant individual, they looked first repeatedly within the ranks of the Qajar princes themselves, and then finally within society at large. They finally found their man in an officer, Reza Khan, who would be willing to overthrow the Qajars, and subsequently crown himself shah. The British found themselves in the position of having to remove him from power, in turn, in 1941, as he, in a much different way from Soltan Ahmad Shah, also was found inconvenient to British plans. Soltan Ahmad Shah died in exile in 1930 in Neuilly, near Paris, and is burried in the family crypt in Kerbela, Iraq.