Emblems of Qajar (Kadjar) Rulers: The Lion and the Sun

The symbol most associated with Persia (Iran) is that of the Lion and the Sun. So much so that most observers forget that the originators of this symbol as an emblem of Persia, and subsequently, of its ruling house, were the Qajars (Kadjars). The symbol itself is of great antiquity. It has astrological reference to the constellation of Leo and its ascendancy when the sun is in Leo. It also refers to ancient symbols of royal lineages and divinity; the sun being a symbol of solar deities and, by extension, of solar lineages. Both the Sun and the Lion are also symbols of royalty from ancient times (e.g., "Lion of Judah"), the sun being the ruler of the heavens, and the lion being the ruler over the animals, as the king is the ruler over men. Closer in time to the Qajars (Kadjars), the emblem of the Lion and the Sun was used on banners of the Timurid dynasty of the Mughal rulers of India, notably those of Shah Jahan 1592-1666 (r.1627-1659), but also earlier by other Persian and Mughal rulers. 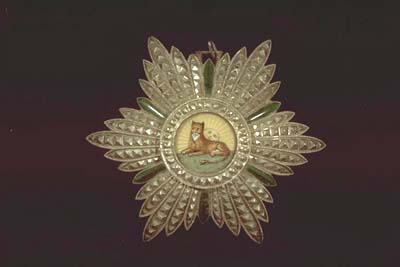 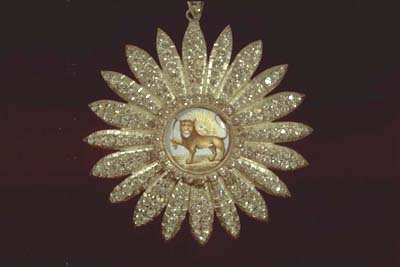 Generally, the lion always faces left and holds the sword in its right paw as depicted in the emblem above. However, in a painting at the Royal Collection at St James, entitled "Review in Windsor's Great Park in Honour of the Shah of Persia, 24th June, 1873," signed N. Chevalier and dated 1877, there is a depiction of the Imperial Standard of Persia, raised in honor of Nasser-ed-Din Shah, depicting the lion facing right not left, with the sun on its back as usual, and with what appears to be a plumed crown at the top. The banner itself is of old pink to light purplish color. This painting is interesting for two reasons. One is that this is a rare depiction of the Imperial lion shown facing right not left (though this fact may be due to nothing more complicated than the artist's attempt to render the standard being blown in the wind, thus flipping the standard from its regular position to one where the lion faces right not left!) The other is that this is one of the first depictions of an official flag for Persia. Apparently the flag depicted in the Royal Collection must have been the design of the Qajar (Kadjar) Persia flag at the time of Nasser-ed-Din Shah.# The green, white and red flag with the lion and the sun at its center (but no crown), became the flag of Persia under Mozaffar-ed-din Shah, and remained the flag of Iran in the Pahlavi era also.

Another depiction of the flag with its lion facing right is shown in this sketch of the Persia pavillion at the world exhibition in Paris from the turn of the century. (Source: Sherafat: A Monthly Paper, Numbers 1-66, 1896-1903, Tehran,1976 [reprint].) 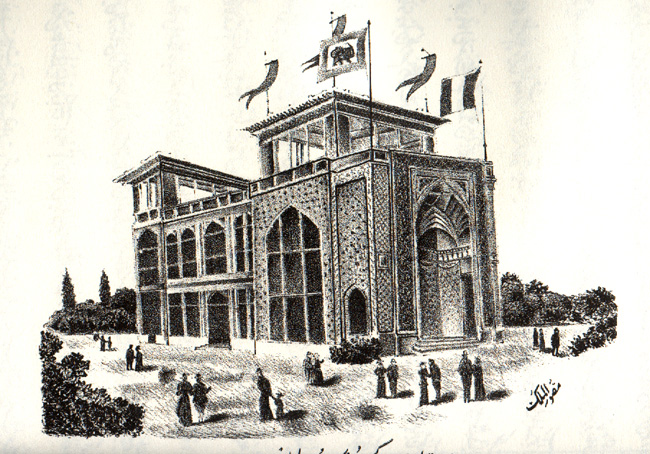 Still another depiction of the lion facing right is found on this magnificent dish featured at the Royal Qajar Paintings Exhibition at the Brooklyn Museum in November of 1998.

The dish itself is dated (1817-18), the period of Fath Ali Shah Qajar's rule. It is now housed in London at the Victoria & Albert Museum. The text of the Iran Heritage Foundation's website from which this image was taken states "This dish, like the Order of the Lion and Sun that was given in 1828 to the envoy of the East India Company, Sir John Malcolm, was the work of Muhammad Ja'far, arguably the most accomplished of Fath Ali Shah's artists working in enamel."

Below are two more examples of emblems of the Qajars (Kadjars), the lion and sun and the Kadjar crown framing two of the famous diamonds now in the national collection in Iran. 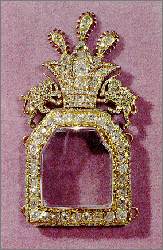 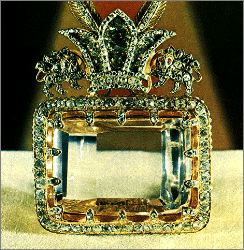 This Lion and Sun emblem aside, there is also an additional emblem associated with the Qajar (Kadjar) rulers, at least from the time of Mozaffar-ed-Din Shah, if not already from the time of his father, Nasser-ed-Din Shah: the personal emblem of the Imperial Family and the Imperial Kadjar House itself, that is, the emblem on their letterheads and on the official documents from the Qajar (Kadjar) court, as distinct from the Imperial emblem of Persia, the Lion and the Sun. This emblem was and is that of two lions with suns on their backs holding up the Kiani crown with one paw and holding the globe under the other. In addition to the immediate members of the Imperial Family, some of the princes such as Prince Mozaffar Firouz and others, have used this emblem as their personal emblem and added their own initials to it. As a rule, however, this emblem was for use of the Imperial Family itself only. Below is a picture of it.

For further discussion of the Lion and Sun symbol, see also Qajar (Kadjar) Orders and Decorations on his site by clicking here, and Postal System of Persia under the Qajars (Kadjars) by clicking here.

* The emblem of the Lion and the Sun was also adopted by the Pahlavis (as were many other things Qajar (Kadjar)!), but the crown in the emblem changed from the Qajar (Kadjar) crown

to the Pahlavi crown

and the sun lost its human features and became more sun-like, and, later even, more abstract.

# A copy of this painting was shown to the author by Soltan Ali Mirza Kadjar who also added that his late father, Soltan Abdol Madjid Mirza also had an interesting interpretation of the Lion and Sun emblem of Persia. In Soltan Abdol Madjid Mirza's view the Sun was the symbol of Persia but the Lion that of Georgia. The combination of the two indicating the unification of Georgia and Persia under one banner. It is indeed an intriguing and interesting interpretation!